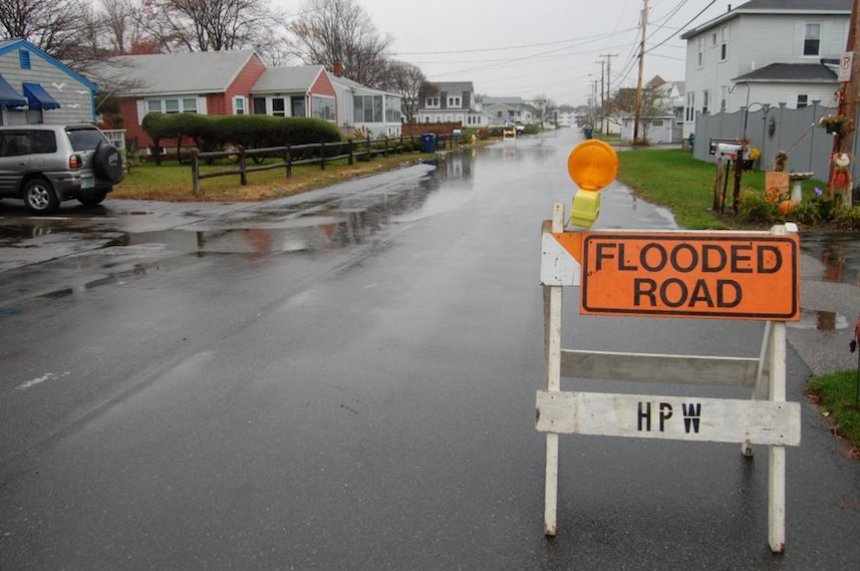 Research out of the University of New Hampshire has found that some roads, as far as two miles from the shore, are facing a new hazard that currently cannot be seen by drivers – rising groundwater caused by increasing ocean water levels.

Researchers have identified sections of specific New Hampshire Seacoast roads that are the most vulnerable as groundwater levels continue to rise. They include the heavily traveled Route 286 in Seabrook and Gosling Road in Portsmouth. Without drastic improvements to these routes, at or below the pavement surface, motorists can expect segments of these roadways to deteriorate more quickly, require more maintenance and be closed for longer periods of time, according to a study recently published in Transportation Research Record.

“Previous road vulnerability studies have looked at road surface flooding, but groundwater has not been addressed,” said Jayne Knott, a civil engineering doctoral candidate in UNH’s College of Engineering and Physical Sciences and lead author of the study. “We found that the effects of surface water flooding on roads occur within a mile of the coast, and groundwater rise effects can occur more than twice that, sometimes all the way to Pease Tradeport.”

UNH notes that groundwater levels are higher than sea levels and that drives the groundwater discharge to the ocean. But as sea levels begin to rise, this forces groundwater to slowly move up to maintain the equilibrium, inching closer to the pavement base layers that need to stay dry to defend their strength.

“The worst enemy of pavement is water,” says Jo Daniel, professor of civil and environmental engineering, director of UNH’s Center for Infrastructure Resilience to Climate, and a co-author on the study. “If the soil and substrate under the pavement get wet, then the strength that we had counted on to carry the traffic isn’t there anymore. So the pavement develops ruts and cracks, allowing more water to get into the underlying layers which makes the situation worse and closing roads for long periods of time to dry out impacting both commuters and tourists.”

For the study, the research team examined the cross-section data for the most endangered sections of five Seacoast roads — Spaulding Turnpike, Gosling Road, Route 286, Route 101 and Middle Street. Highways are usually built more stout with thicker cross-sections of materials to withstand heavier traffic, while smaller town roads are sometimes little more than layers of pavement over shallow depths of crushed gravel. The thickness of the pavement base layers provides a buffer that protects the road as groundwater rises. The roads where groundwater is already close to the surface are the ones that will likely be affected first, although local geology, topography, soil type and drainage can also influence this.

Researchers then compared the N.H. Department of Transportation (NHDOT) road cross-section data with current and projected groundwater levels given various sea level rise scenarios ranging from one foot by 2030 to 6.6 feet by the year 2100. The results indicate that although Route 101 and the Spaulding Turnpike will probably not have many adverse issues by rising groundwater until late in this century, both Route 286 — an emergency evacuation route — and Gosling Road are likely to be some of the first roads affected.

This site uses Akismet to reduce spam. Learn how your comment data is processed.